I spent some time looking through these old family photos that John’s parents gave us.  At the time, I thought one day they would look at them with us.  They’ve been sitting in a box in a closet.  We looked at them and laughed and wondered about their life before we put them on a shelf; forgotten for a while.

I know they are family on John’s Dad’s side, but there’s not anyone alive that can tell me their names or identify which family they are related to on his side of the family.

I picked out some of the unique ones and thought I’d share.  I have no idea where the pictures were taken or when.  I only can guess based on the fashion.  They made me smile!

They show personality and the sweetness of their daily life of what we would call ‘The Good Ole Days’ gone by when time was filled with simplicity.  But was it?  Or do we imagine any time period that we haven’t experienced…simple and uncomplicated.  I bet they laughed and cried, argued and loved, worked and played, just like us.

However these sweet people spent their life, these pictures are only a reflection of a brief moment in their life caught on paper.  Gone are their history because there isn’t anyone to tell it.

In a few of these faces, I see physical resemblances to people I knew.  The people in these photos have long since gone, but I know they were loved because someone took the time to take a photo because they didn’t snap a ‘selfie.’

These people posed, photos were developed, and I’m sure they were looked upon with love.  Most weren’t labeled because the people who they belonged to didn’t think ahead to a time when they wouldn’t be known.

Here are the pictures that I took the time to pick out of the dozens that have been left to me.  They caught my attention and made me smile or wonder about.  I hope they are enjoyed by you also.

It took me a minute to see the pipe in this little guy’s hand.  He must have seen his dad smoke it, so he’s emulating him.  Love his hair and his expression!  Got his Mary Jane shoes on and he is totally rocking those socks!

These two kiddos are cute.  I know one is a boy and I believe the other one is a girl.  Very serious expressions.  I see the Mary Jane shoes again on the boy.  Don’t you love their sailor bows?  The one on the right reminds me of John’s forehead and chin.

I think it’s interesting how the background has been blocked out, so not to distract from the people or either it was taken in a studio.  I can’t decide.  I have others with similar backgrounds.

Can’t you just see these guys on ‘The Christmas Story!’  The young one is thinking hard on what he should ask Santa to bring him for Christmas.  The other two are busy making their list!  The print on the chair is adorable.  Notice the picture albums under the coffee table and the items on the mantle.

These kids are piled in their wagon!  Notice the cars parked on the street.  Must be a good brother or cousin to keep the young ones entertained.

Doesn’t she look like an independent lady driving herself around?  I like her slight smile. The steering wheel looks so large.  I love the way she is looking so proud in her automobile!  I think both pictures are of the same lady. 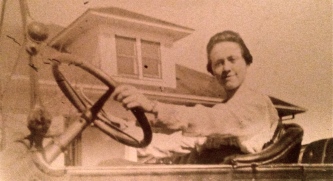 He’s standing at attention in a flower patch.  His boots are so in fashion today.  Not sure if he’s in the service or in a college cadet program.

This picture caught my attention because four of the women are dressed in darker clothes and wearing hats.  Look at the flowers and bows on the hats.  The one girl is in a light color.   Wonder why she isn’t wearing a hat?  I wonder what the temperature was that day?

Modest bathing beauties.  I noticed that they are sitting on the end of a wooden bridge, and probably have been swimming in the creek or river.  The one shoe sitting there tickles me.  The guy in the back has a one piece bathing suit on.  I saw him in another picture with one of the girls.

He’s proud of his bottle of liquor and has a gun tucked in his belt.  Pretty suave with a hand in the pocket and a hat tilted up.

There’s part of a horse in the background and I wonder if the rest of the background hasn’t been smudged out in editing or if it was taken in a studio.

These three have character.  It’s very obvious that they have experienced life!  Love the wife in her hat and covered up with a beautiful quilt.  Both guys wearing suspenders, one with cuffed pants and a cane, next to chopped wood on the porch.

The one sweeping caught my eye because he has a family resemblance in his face.  He reminds me of John’s papa Hendrix

The other because he’s posing with his gun!  It must be high noon because he’s standing on his shadow.  I wonder if he actually shot it?

Her beautiful eyes caught my attention.  She must be proud of her coat and hat.  I”m sure it was taken at a studio or school.

Look at that smile.  I honestly think he must have been fun to hang around with.  He reminds me of Ernie, one of the sons from ‘My Three Sons’ the old television series.

These four are waiting a a Railway Station.  Notice the sign behind them.  Sure wish the colors could be seen. Hats are so fashionable.  I wonder if they were going or coming.  I’m sure two of the women are related.  They look so happy!

Standing in front of the corn.  I’m loving the way three are looking at the camera, but one guy is looking at his wife.  Check out his body language.  I wonder if the shorter lady is pregnant.

A sailor sitting in a very ornate, but uncomfortable chair.  He looks pretty impressive with his collar up and shiny shoes.  I wonder where he served.

This is one of my favorite pictures.  I’m sure it was taken during WWII because they are sitting around the radio, most likely listening to the president speak during one of his Fireside Chats.  Their expressions are intensely listening.  The pictures next to the radio says it all.

One of these days, our pictures will be bombarding the future, showing off our past.  I wonder how much we will make them laugh about our life.  I’m sure we’ll be entertaining.

One thought on “Lost Names and Faded Images”