I woke up after my first night camping while it was still pitch black outside.  The clock on my phone read 5:20.  The insects from the night before were almost silent, however, the birds were beginning to chirp.  There wasn’t a breeze, so inside the tent was balmy and too warm to be comfortable.

When the dawn broke about an hour later, I set out for the shower.  It felt good to be sweat free again, at least for a little while.  I still had to register for the campsite, so I drove to the registration cabin, but I was too early.  They didn’t open until 8:00.  I had about 20 minutes to kill, so I explored the empty cabins near by.  They had four of them and they overlooked the valley of the mountain.  Taking advantage of the lawn chairs on one of the back porches, I enjoyed the view.  It was beautiful with a soft haze in the sky.

I registered, talking to the three park rangers (all women) about the state parks I would be visiting.  I bought a parking pass and paid for my site.  $90, not too bad for three days and an annual parking pass.  It’s cheaper in the long term to buy the pass because parking is $5 a day for each park visited.

Breakfast was calling, so I found a local cafe called Eddie Mae’s.  Nothing fancy, I ordered an Egg plate with bacon and grits.  Mia, my waitress, was very attentive.  Later, I knew why.  Now my friends, when you notice something that needs to be pointed out to someone, the polite thing to do is to say something.  I guess Mia didn’t want to embarrass me.

After breakfast, I went to the ‘Tourist Information’ building.  Using their restroom, I was appalled to look in the mirror and see that I had my shirt on inside out!  I had talked to no less than six women and not one of them said anything about my seams or tag on the side of my shirt standing out like red flags!

There was a mirror in the restroom when I dressed this morning and I did use it.  The problem was that I forgot to take my bra to the shower.  So, when I got back to the tent, I stripped off my shirt, put on the bra, and put my shirt back on.   Unknowingly inside out!  I walked around for almost two hours like that!  Where’s a honest person when I need one?  Oh well, I won’t be going back to that restaurant….(giggling)!

Since sight seeing was on my agenda, I decided to start with Calloway Gardens.  Although it does have gardens, it really is a resort type of area.  It consists of 2,500 acres filled with places to stay and all kinds of activities to do.  I visited the Butterfly Conservatory, walked some gorgeous garden trails, watched skiers on the small lake.

Bees on the sunflower

I admired the replica they had showing their ropes course.  I tried to get up the courage to try it, but I’m not that brave.  Maybe I’ll try a rope course and zip lining when I find my “Courage” like the cowardly Lion.

One of the park rangers suggested I go to town of Warm Springs because that’s where President Roosevelt stayed while he was campaigning for president while he was governor of New York and visited while president.  The warm springs were thought to help the effects of his polio and his house and the springs is now a historic site.   It was in this town where he died April 12, 1945.

I drove to the small town of Warm Springs, checked out the warm springs, (Not used by the public anymore, only by The Roosevelt Institute), and had lunch at a cafe.  I strolled the few stores and visited a fish hatchery also.  I was not overwhelmed by it compared to how many people told me to visit it.

When I say, ‘small towns’, they are small without much to do.  I visited three of them.  I don’t know where the residents buy their groceries because none of them had a real grocery store.  I did find an ice cream store selling Blue Bell and of course, I had ice cream for dinner. 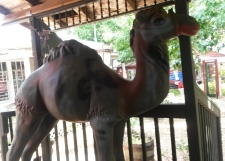 A bikers bar outside seating

Back at the park, I took a three hour nap, which is why I’m still awake at 1:00 A.M. enjoying this beautiful cool evening.  It rained briefly, which I loved listening to on the tent and now the breeze is wonderfully refreshing.  I’m not even using that new fan I bought today.

I’m typing in my camp chair, listening to the rhythm of the night creatures.  The moon is in it’s waxing mode, so before too many nights, it will be full.  It’s being reflected on the lake along with lights from the occupied cabins across the lake.  I’m not the only one awake because I can hear distant voices from a tent and see the glow from inside.  Behind me two large RV’s are parked and occasionally, I’ll hear the A/C power up.

Besides the lack of conversation, I’m enjoying this camping experience.  Tomorrow, I’m staying in the park to explore.  So, now my friends, I’ll say good night and crawl into my tent, position myself on my ‘bed’ and go to sleep.

“As Scarlet O’Hara would say, “Tomorrow is another day.”

(Couldn’t help myself….Georgia just begs it to be said)!