After my road trip last year, I am hooked on Summer exploring.  Always a fan of Gone With the Wind, I decided to go see Savannah.  All the pictures I’ve seen of it are beautiful!  I browsed brochures, maps, and Internet sites trying to decide where to explore in Georgia on my way to the Atlantic Coast.  I will admit that I am a history fanatic.  There’s just something about old buildings, historic towns and homes that thrills me.  I can literally be driving and when I see an old building, my foot wants to hit the brake, pull over, and take a picture.  I’ve been known to do the same over flowers.

Keeping expenses in mind, I decided that I couldn’t afford to do nightly hotels.  So, I came up with the brilliant (so, I think) idea of camping.  Georgia has many beautiful state parks.  I don’t know if another state has as many, but when I looked up how many there were in Georgia, I was amazed.

I decide to start and move West to East and then North and back home.  So, I left Monday heading toward Louisiana and into Mississippi.  My plan was to spend the night at a KOA (Kampground of America) for my first night along the way.  Then to cross Alabama and begin my Georgia journey.  This year, I thought I put more preparation in the details.  That however didn’t make my first day go without a hitch.

First of all, I left later than I planned.  (I always do that)!  I have a ‘thing’ about leaving my house in disarray.  I can just imagine an accident happening and people having to go through ‘my junk’ and seeing just how unorganized papers and such are.  (None of my school friends would be surprised because I can’t keep paperwork organized there either).  This year wasn’t any different.  Let’s just say that I left about 3 hours later than I should have.

Passing over the Mississippi River, I stopped at the state line and took pictures of the bridge as the sun lowered itself over the horizon.  It was a pretty sight.

I was almost to Monroe, LA when Willie’s face appeared on a billboard advertising his restaurant.  It hit me that I was passing the famed home of the Duck Dynasty Crew.

Yes, I was exactly like everyone else who passes that place.  I had someone take a picture of me under the “Duck Commander, Buck Commander” sign on the building.  Off I continued to cruise!

Darkness descended and I wasn’t anywhere near where I should have been to put up a tent at the KOA.  I called and told them I was running late and they said they would put my paperwork by the gate.  At 10:00 P.M. I took the exit that said, “KOA 3.6 miles” and I followed a curvy road.  In my mind, I was giving myself the ‘How stupid could you be’ speech.  At 10:30, I gave up.  I called them and told them I was just going to spend the night in a hotel.  My heart simply wasn’t into putting up a tent… IN THE DARK…for the first time.  I got back on I-20 and continued to drive.

Adrenaline had kicked in and I wasn’t a bit sleepy, so I journeyed into the next state of Al-a-BA-MA!  I can hear Forest say it that way.  I called Cam to tell him my change of plans.  I drove another hour and stopped in a small town of Demoplois, Alabama.  To tell the truth, I was happy to have a shower and a bed for the night.

Rising early, I was on the road by 8:15.  I stopped in Selma, Alabama for breakfast.  Good ole grits and eggs and an awesome cup of coffee.  It was a Mr. Waffle and once was probably a Waffle House.  I sat at a booth close to the counter.  In front of me was three men and one was in a booth behind me.  I tried to ignore one of the men facing me, but he wouldn’t stop staring even though I was trying not to make eye contact.  I finally just laughed and decided to talk to him.  That did help stop making me feel so uncomfortable.   I became a person to him instead of an object.

I talked to the waitress about historic sites to see there.  The sweet gentleman behind me, told me to only stick to the main streets close to the downtown and not to go other places.  I knew what he meant when I drove there.

The downtown was mostly rundown and people on the street didn’t return my greeting.  I decided to just take a few pictures and head on out.  I drove the historic route between Selma and Montgomery that the Freedom Riders took back during the time of civil right unrest.  Not a lot to see during that fifty miles.  I tried to think about the energy levels and apprehension that must have been on those buses.

Seeing that I was going to pass through Tuskegee, Alabama, I decided to stop and see the Tuskegee Airmen National Park.  It was easy to find, but sadly it wasn’t visited by many people.  I was one of about nine people there. 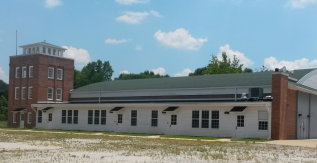 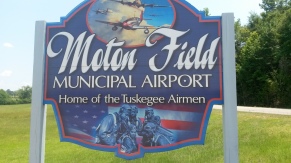 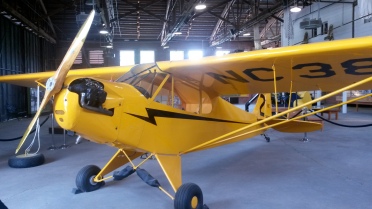 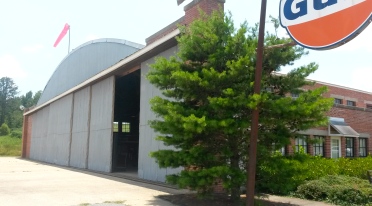 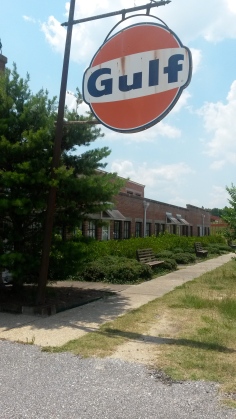 It was a pretty awesome display of planes, hangers, pictures, and testimonials of the men and women of the Tuskegee Institute who flew the planes and the civilians that were their support crew of mechanics.  They shared their thoughts about how they felt to be segregated, but still serving their country and the civil unrest that followed for their civil rights.  It was very educational and moving.

Found my way to Georgia finally!  I hadn’t stopped for lunch and by about 2:30, I was starving.  After I passed through Columbus, Georgia, I decided to look for somewhere local to eat.  I’m pretty sure I was on Highway 80, but it is so different from Hiway 80 in Texas.  There aren’t hardly any towns on it!  It was like that from Selma on.

I pulled over and took some pictures of old building and churches as I was driving.  After consulting the map, I decided to turn on the GPS and ask it to find my first state park.

About 15 miles from the FD Roosevelt State Park, I found Manchester.  It’s a sweet small town with a downtown.  I drove Main Street and found the restaurant with the most cars around it.  That’s always a good sign.

The Magic City Grill was wonderful!  I had fried green tomatoes, shrimp with a kick, and coleslaw.  Yummy!  The owner and the ‘chef’ came out and visited with everyone asking how they enjoyed their food.  He visited with me and asked me about my vacation and what my son thought about it.  He asked me if I would review his restaurant on ‘Yelp.’  I’ll happily give him a great review.  It was one of the best that I’ve eaten at in a while.  I could tell he takes great pride in it.  I did ask about the recipe for the fried green tomatoes.  He coats them in buttermilk, flour, and Parmesan.  They were delicious and didn’t taste too heavy at all.

I was so happy to arrive at my destination for the next three days.  I picked a site close to the lake and proceeded to put up my tent for the first time.  Lots of sweat later, due to hammering tent stakes into rock hard ground, my tent was finished.  I visited with a few campers close by.  I strung my lights and arranged ‘my room’ to feel as comfortable as possible for a tent.

I was surprised how well I slept.  I woke about 5:30 A.M. (hot and sweaty) and decided I need to purchase a fan that plugs in.  I explored the park, walked some trails, and simply enjoyed a peaceful day.   I sat in my camp chair, admiring the lake, listening to loud croaking frogs, and bugs communicating back and forth.  I read sweet comments on Facebook from friends until about 10:00 P.M. and then ventured out to use the showers.  They weren’t bad at all.  Hot water and relatively clean, but best of all, no spiders or stick bugs.  I walked back, shining my flashlight on the ground, carefully looking for ‘wildlife’ of the long kind.

As soon as I sat back down, the no-see-ums attacked.  You know the bugs that bite and you can’t see what’s biting!  So, I cocooned myself inside the tent.

Until then Georgia is on My Mind…..Sorry, just couldn’t help myself!