I’m a creature of habit.  I tend to order the same food from restaurants I frequent, eat cinnamon rolls, pies, or cookies for special treats, park in the same area of parking lots at stores, and follow the same morning sequence to get dressed.

However, I will accept an invitation at a moments notice, tend to drop in uninvited at friends’ homes, make quick decisions, and trust my instincts about people.

Security is important to me.  I am gullible because I expect people to be truthful.  Friends are a priority because I value relationships.  I look for happiness and try to be positive, and I don’t have mercy for people who wallow in their situations instead of rising above the negative.

Courageous or adventurous in not a label I would have given myself six years ago.  Circumstances of life changes people and when John died, my world forever changed.  Through God’s grace I have grown.  I hope how I handle those changes cause others to see God in me and I hope that I’m a positive influence on anyone starting down the road that I have already traveled.

When Cam told me that he wouldn’t be coming home for the summer I had to learn another role.   What would I do with all my summer time if I didn’t have someone to mother?  The idea of traveling by myself was planted and I let it grow.

I love driving, but while John was alive I’d never drive in traffic because it made me a nervous wreck.  I’d drive almost to Dallas, but when we’d get to Terrell, I’d pull over and change places and let John drive.  All that merging and traffic lanes made me squirm.  John and Cam used to joke that I needed to be tranquilized until we got to our destination.   Sometimes, I’d even agree.  When I tried to give Cam a kidney, I had to drive to Dallas for doctor appointments.  I recruited brave friends to ride with me while I navigated through Dallas for my first and second time (Thanks Katie and Carol).  Spending that month in Dallas after Cam’s kidney transplant gave me enough confidence to drive in traffic.

John gave me a compliment that at the time wasn’t very complimentary to me, but in retrospect I now cherish.  He told me, “One of the reasons I fell in love with you was because you were responsible and did what was needed, no matter what the consequences to yourself.”  My friends, that’s not what a girl wants to hear from her husband of why he fell in love.  I understand he meant that I wasn’t a flower to wilt or die that I was tougher than that.  We don’t fall in love with bodies, we fall in love with spirit and souls.  I fell in love with his sense of self and his strength.  That’s what kept us together through all our rough spots and happy moments.  When separation came I did what was needed and I’m happy to say my strength was not my own.  I leaned on God’s word and into His strength and the arms of my friends to get me through.

Deciding that I wasn’t going to spend my summer at home, I picked Vermont for my destination and I told as many people as I could what I was going to do.  Partly to keep myself reaching for that goal so that I wouldn’t back out.  I set July as the date to give myself June to relax from teaching and to anticipate doing something in the middle of the break.  A week before leaving, I set my route, booked my hotels, and made my itinerary.  Cam and I planned a few days to spend time together during the trip, so I had to keep to my schedule.

The trip was more liberating than I can possibly explain.  I am not a bold person.  I had to step out of my comfort zone especially the first day in Nashville.  It took every nerve I had to go talk to the band in one of the bars and ask to take my picture with them on the stage with everyone watching.  Their reaction helped boost my confidence and it was as if God placed me in the right bar and with the right band to be bold.  I know that sounds strange saying bar, band, and God in the same sentence, but truthfully, I couldn’t ask for a more friendly person than the man singing in that band.  If it had gone any other way, I don’t know if I would have had the confidence to step out as much as I tried to do with all the people I met on my trip.

I learned to start conversations with perfect strangers at diners.  I met cute, sweet, confident ladies, couples invited me into their twosome or foursome, the occasional single traveler and I became brief couples on tour, and I met some of the most memorable people who shared their stories of how they met or what they were currently doing.  I attended three church services and saw different ways of fellowship and worship.  I drank with Canadians and I laughed a lot!

There were many times when I wished I had another person next to me in that car.  I wanted to share the joy I felt when seeing the beauty of the mountains when coming around a curve, talk about the wonderfully simple ways of life of the Amish people, or simply eat together at one of those unique places that spring up in small towns.  I wanted to lay in bed and share the wonder of the day with someone.  Instead, I wrote Facebook notes.  Read or not, they gave me an outlet to share my events and thoughts and when the towns and states started getting confused, they gave me a reference and helped preserve the days happenings.

There were plenty of times that I was happy about being by myself.  No one else did I have to ask if they minded if I wanted to stop at a quirky place, decided to explore country roads, kept anyone else’s schedule or worried about bothering them as I sang loudly in the car.  I didn’t have to ask anyone if they were hungry, what or where they wanted to eat, or when to move on. I enjoyed the peacefulness of my thoughts and the beauty of God’s creation.  I shopped at a leisurely pace, explored lots of cemeteries, and merely wandered the streets taking pictures of houses and churches.  I’m sure that would have driven a lot of people nuts.  I loved it!

When I stood on the beach in Maine with my bare toes digging in the sand, I could have taken on the world, I felt so powerful and wonderfully happy.  I had decided the route, made every decision, and navigated every road to reach that destination.  I had enjoyed the wonder of the trip.  I was a long way from home and had made it safely with God by my side.  I prayed on the roads, in the hotels, and worshipped my Savior in song.  For days afterwards I’d think, “I’ve stood on a beach in Maine!”  I had a smile on my lips.  When I think on it, I still smile and giggle.

I navigated myself home, going through a different route, without any definite itinerary or hotels booked.  I drove as far as I wanted and then found a place for the evening.  I stopped along the way to explore and was sad to see diners change to grills.  I thanked God daily for safety.  When people found out I was traveling alone on a road trip, they would say ‘be safe’ and I never felt unsafe except once when I was with Cam in Buffalo, NY and turned into a sketchy neighborhood trying to turn around.  I felt the peace of the Holy Spirit with me all along the way.  I came close to three wrecks, two my fault for gawking while driving and the other from a swerving car, but though all of them, God kept me safe and made me more alert.

Somethings I have an opinion about.

Now, I’m going to accept the labels ‘adventurous’ and ‘courageous’ because right now that’s how I’m feeling.  It may not last too long, but for now I’m pinning them on me.  I accept that I’m that strong person John fell in love with and I’ll continue to bloom.

I’m happy to be home.  I traveled 4,642 miles in eighteen days.  My brother, Paul, said I was a natural truck driver.  That’s a compliment coming from him.  I’m glad I did a road trip and will definitely do another.  Thankful that I had friends that supported me with comments and the occasional phone call and carried me in their arms and hearts.  I appreciate each and every one of you. 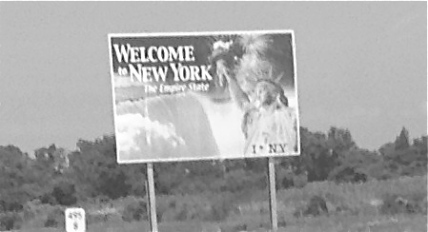 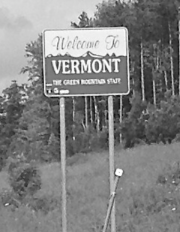