I know I awoke with a smile on my lips.  New York City and Cam; a perfect combination.  After breakfast, we walked to the subway station just a few blocks from his apartment.  My heart did jolt a bit when after getting down to the subway, he said, “We’ll have to run!”  Let me tell you, my pace is nowhere close to his and when I stepped into it, I was puffing.

I’m a people watcher and I observed as we stood, moving in rhythm with each other as the car rocked on the tracks.  It is interesting because as intimately close as sardines squished in a can, there is still an isolation from each other.  No one makes eye contact.  It’s like being in an elevator.  Each person knows the connection is not permanent.  This morning, someone got on and say ‘good morning,’ but no one responded.  Some people read books or their phone, others close their eyes, or listen to music.  On the second subway. I sat as a lady stood in front of me and I avoided looking at the section of her body facing me.

I parted from Cam in Midtown Manhattan, and I strolled by the Rockefeller Center taking in the Christmas tree.  It seems much smaller than on television compared to the buildings around it.  I watched skaters and snapped pictures.

In just a bit, Cam called to say he was running an errand, I crossed the street, finding a large bag of Hershey Kisses on the ground.  I’m sure they fell off of a stroller or out of a bag.  I picked them up and sat on a bench waiting for Cam to join me.  As I sat there, a young man passed and then turned around and came back.  “Can I ask you a question?  I’m writing a book about advice from strangers.”  He asked me what advice I’d give a young person?  Just coming off the top of my head, I said, “Be a friend.”  We talked briefly and he gave me his card incase I’d like a copy of his book someday.  It was a sweet start of my day; Christmas, chocolate and conversation.

Cam joined me and we headed off toward Park Avenue.  Stopping at Starbucks for a Peppermint Mocha, we walked along sharing our brief morning events.  If you could picture me, I’d have a huge smile on my face.

As Cam went back to work, I walked along Park Avenue window shopping and occasionally going into stores.  I smiled at ladies pushing strollers and passed men in suits.  If I found a church or building open, I went in to explore. 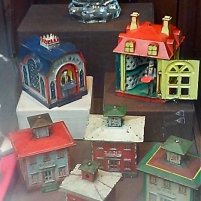 I’ve found when traveling by myself, a smile and a few questions are a perfect start to learn new things.  Christ Church United Method Church is lovely and I hope to attend Christmas Eve service there.  Just a bit further, I found a building with large columns and I entered.  Inside, organ pipes lined the front and a huge chandelier hung from the ceiling.

Coming across the room, I met James.  Built in 1923, it had the original organ, chandelier, and wall sconces.  Now used as an event center, he shared his pride of working there and poured me water that he filtered himself.  He introduced me to Dora, from Dallas, and two energetic dogs.  On Christmas Eve, there will be music and singing there.  Maybe, we’ll drop back by and hear that organ. 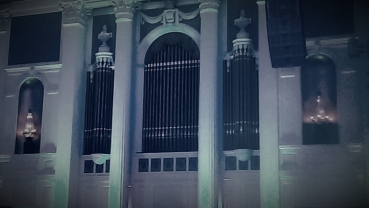 Walking along, brown garland and wreaths caught my attention.  They were on the Park Avenue Armory.  I had no idea what it was, but when I entered there was a box office and several people standing in the hall waiting to work.  I asked if I could look around and even though it wasn’t opening time, they let me walk the halls and look in some of the rooms.  It was gorgeous.  Now it’s used for performing arts.  It was impressive. 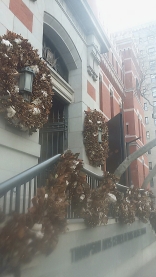 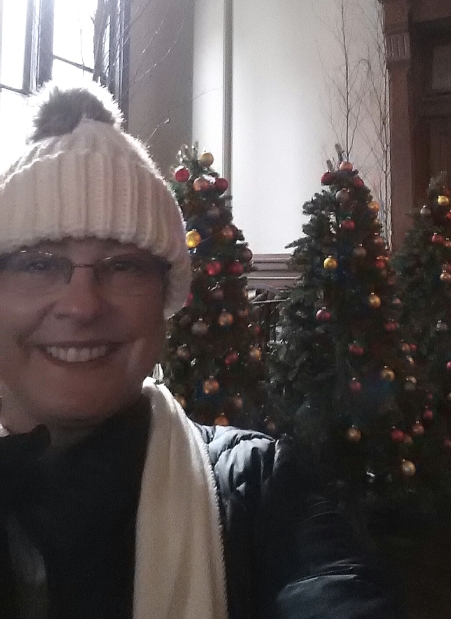 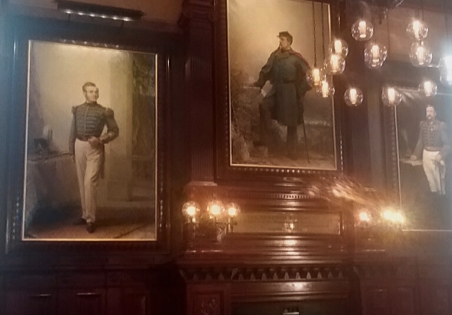 Next, I walked to Central Park and walked along the park along 5th Avenue.  The pigeons outside of the Plaza hotel were entertaining.  There’s always so many people there milling around.

My next stop was taking in some Christmas windows.  I stopped at Bergdorf Goodman.  Wow!  What a store!  Inside the designer names jumped off the walls.  Some I knew, others, I didn’t.  I started on the seventh floor, which is housewares and Christmas.  Passing the delicious smells wafting from the restaurant, I found the Christmas decorations.  A white Polar bear stood catching my attention, but what really startled me was running into a familiar face that I’ve only seen in the movies. 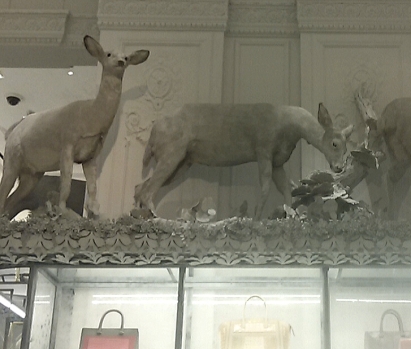 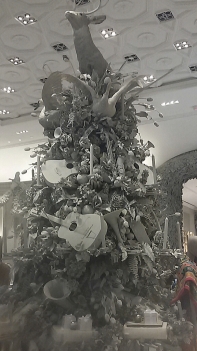 There standing in the Christmas section was the “inconceivable” guy from The Princess Bride.  I know I stared.  He looked at me briefly and said, ‘hello’ and in a few long seconds, he walked away.  I felt like giggling!  I immediately texted Cam to share my news.

I had so much fun going through all those floors.  I had a smile a mile wide as I explored.  One sales lady asked if I’d like to smell perfume.  The card on it said, “perfume is an art.”  I thanked her and she asked if I’d like to buy one or two.  As if!  I almost giggled again.

On the floor with furs, I talked to a sales clerk and asked him if he got used to working in such an atmosphere.  He said his first two months were mouth dropping, but now he was used to it and the famous people that sometimes came in.  I told him I’d seen the “inconceivable” guy.  He had no idea who I was talking about, but hey, he was young! 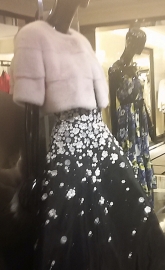 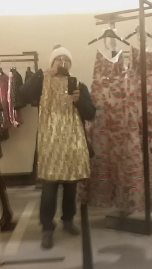 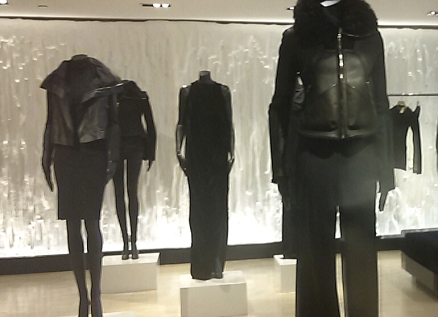 Hunger called and I had a spinach calzone for a late lunch, while I let my phone recharge and then I was back off to see Saks Fifth Avenue windows.  I wasn’t far from Cam’s workplace, so we arranged to meet when he got off.

I didn’t get to see the windows up close because the front of the building comes alive with lights as dusk falls and the crowds are overwhelming.  Saks is across from Rockefeller Center.  As the light show began, a man from Maryland and I ooed and awed togehter the first time it came on.

I crossed the street and waited for Cam next to St. Patricks Cathederal.  That’s a beautiful church.  Waiting there, I met Jerry who lived in Brooklyn, but was orginally from Italy.  We talked about food, the cold weather, and grandbabies.  He had three.  One ten year old boy and a set of one year old, girl twins.  He, also, was meeting someone, but they were going to a Broadway play.  We chatted.  He had lived in Brooklyn forty-three years.  His Italian accent was still strong and it made listening to him interesting.  His someone arrived before Cam did.

Before leaving that area, we squished our way along to take our picture with the tree.  As we waited to get a spot, I told Cam that people had been so nice today and a lady overheard me and laughed.  It was true.  Everyone I came into contact with had been so pleasant.

Cam and I ended our evening out walking to Bryant Park where there’s a skating rink and shops set up as a market place.  We watched a while and then decided to go to Chick-fil-a for dinner.

Along the way, we came across Lord and Taylor on 5th Ave.  Their windows were animated with enchanted animals.  So very cute.  The Salvation Army bell ringer was entertaing as well.  He was dancing and ringing his bell.

Finally Chick-fil-a sandwiches and fries, and then, home on the subway.  The subway in the evening isn’t as distant as the morning rush, but people still tend to their phones.  On one stop, we had another train stopped next to us.  I was watching people and I made eye contact with a lady about my age.  It was one of those times where communication happens without talking.  We both smiled and then the subway pulled out.  It’s funny how small things touch us.

Back at the apartment, I looked at my step count.  23,685…not bad for my first day of exploring.  I wanted to get this written tonight, so that I didn’t forget the tiny details of my first day exploring Chirstmas in New York.  It was incredibly good and the people really did make my day memorable.