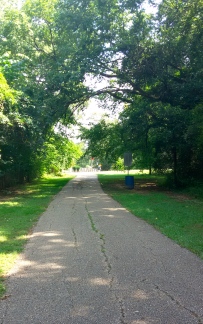 Get up…get moving!  This is my fourth week of summer and with a little inspiration from a friend, I’ve started walking.  Day one walking, I planned on walking a couple of miles on a path near my apartment.  I have walked that park, I bet a hundred times over the last twenty-five years.  Today, however, I noticed something that made me walk the whole path.

I had gone about a mile when I passed a pine tree with a spike embedded in it.  I’ve not noticed it before.  To me, it looked like a railroad spike.  That’s interesting because Cargill Long Park was built with a grant from Rail to Trails Conservancy.  It was the second one to be constructed in Texas at the time.  Old railroad beds are made into trails that can be accessed by foot or bikes.  According to Rails to Trails Conservancy, there are now 35 individual trails in Texas with thousands of miles of trails in the United States for people to explore.

Now, I’m not sure if the spike is a relic from long ago or if it was hammered in that tree sometime in the history of the trail.  However, it made me curious enough to do a bit of history digging.

The land was donated by the Cargill family back in the early 70’s, but before that around 1010, it was a railroad line that moved ore from Ore City to Longview, so that it could be shipped from Longview to other places.  World War I impacted the profitability, so it was used as a mail train for a bit before it stopped running.  Robert Cargill Sr. bought the land for the mineral rights sometime in the 1950’s.  There’s a newspaper article marking the fortieth anniversary of the trail if you’d like to read it and a few pictures and an article about the Port Bolivar Railroad.

As I walked the whole trail which is three miles, one way, I noticed the differences in the neighborhoods.  At the beginning of the north side of the trail where I start, the houses are new.  Some are even still under construction.  As I walk to the end of the trail, the houses change.  So too, does the upkeep of the trail.  I’m not sure if it’s because more people use the newer part, or no one is reporting the trail conditions.  It may be a bit of both along with budget restraints.

New construction on north side

homes along the way 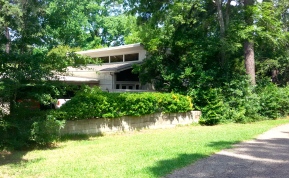 Small car lot on the south side

There is maintenance happening because three times, I’ve been passed by a City of Longview truck driving the trail and emptying the trash cans and cleaning the restrooms. 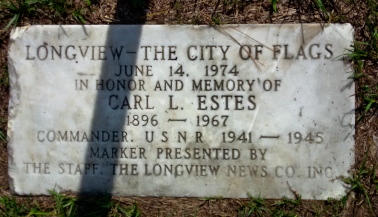 Flag near the end of the trail

At the south side of the trail, where it ends, which is the older part of town, the houses are smaller and more run down.  The trail actually ends at the old armory at Teague Park.  Since the first time I walked this summer, I haven’t ventured passed the two-mile mark simply because of the decline of the trail and the growth of the grass and bushes beside the trails.  Makes me a bit uncomfortable because that part of the trail doesn’t have people walking and I feel more isolated.  Safety first is being proactive on keeping myself safe.

Along the path, I notice the occasional liter, I pick it up and carry it until I can deposit it into a trashcan.  This isn’t new for me.  As strange as it sounds, I believe it’s a command of God to me to pick up trash.  I can’t even explain it.  When I see a piece of trash wherever I am.  Sometimes I think, “It’s a long way to a trashcan.”  But then, a small voice inside prompts me and I pick up the trash.

I’m not OCD!  I’ve been picking up trash for a bit over a year now and I’m okay with it.  Before judging, think how beautiful our world would be if everyone picked up a bit of trash!

To me, it’s much more pleasant to walk a trail than to walk on a treadmill.  The sights, sounds, and smells are interesting and sometimes entertaining. Yesterday, for example, I met six ladies in their late forties from Taiwan who were visiting a friend that married an American.  They were walking in flat sandals and carrying their purses. (That’s a big hint that they aren’t regulars on the trail).  I caught up with them on the last quarter of mile, so I slowed to visit with them.  They were walking in two groups of three.  Only one spoke English well and she wasn’t in the group I slowed to walk with.  However, we did manage to communicate.  It was a sweet half mile walk.

Several times, I’ve caught a young group mostly men and some women running with the Marine recruiters.  Potential recruits or official recruits, I’m unsure about, but love listening to them recite whatever is called out by the lead runner.  They also stop and do crunches and burpees.  They are entertaining and can be heard coming from a distance.

I loved how they encouraged each other.

Smells….some wonderful like fresh mowed grass (which I can smell before I hear the lawnmower), or  a passing male runner that smells of strong deodorant, or fragrant flowers that is passed on by the breeze.  Not so great smells….stagnent water, sweaty bodies passing, an over perfumed woman, and a possible dead animal.  Either wonderful or stinky, they do make an impression as I walk. 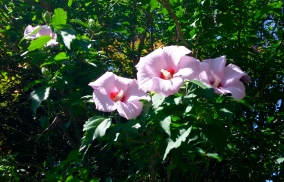 Passing dogs being walked are nice to stop for a quick pet and people bicycling by sends a quick breeze by.  Get out and enjoy a trail in the early morning before the heat overtakes and makes a person turn into a wet washrag or wait until the sun is almost setting, but then beware of mosquitos.  The point…enjoy God’s beautiful creations! 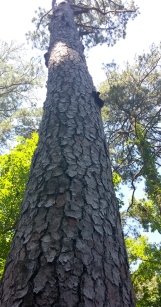 Looking up the tall tree 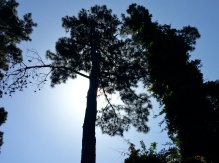 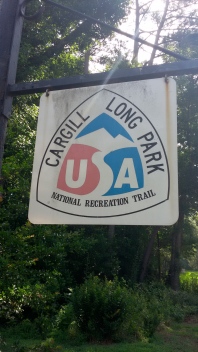 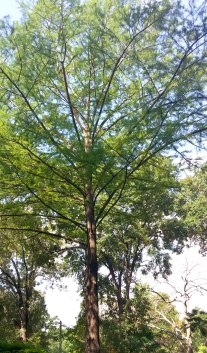