I’m feeling a bit emotional.  A bear hug and a firm shoulder to cling to sounds heavenly.  I thought about hitting the bag of chocolate that is sitting in my closet, but the sugar makes my knees ache.  I compromised by drinking a glass of chocolate milk.  Reaching out to someone by text crossed my mind, however, it is after midnight.  So instead, I picked up the computer to write.

Recently, I sailed on a boat with a person who wasn’t an experienced sailor although we had Pete, an experienced one, on board to give pointers as needed.  The couple sailing with Pete was there to get experience and I was there to simply sail.  Now myself, I know nothing of sail boats and only have been sailing a few times.

On this particular day there was a sailing race.  There were five boats competing.  The premise was simple: Sail around two markers, three times without bumping into the marker.   We were sailing on a lake and we had good wind, not to mention a sky full of beautiful sunshine.

Out we sailed.  We gathered near each other and were given a five-minute warning to be ready to begin.  After five minutes, the flag waved and we were off.  This boat had a tiller to steer and it feels a bit strange because you pull it the opposite way you want to turn the boat.  Our helmsman steered (the not so experienced sailor) and Pete and the sailor’s wife were tacking (moving the sails) as needed for the wind direction.  I sat or stood at the back out of the way!  It’s pretty interesting listening to the directions because sailing has its own vocabulary.

We watched the telltale  (ribbons on the sail) to see if adjustments needed to be made in steering.  It was so fun when the wind filled the sails and we moved forward quickly, but when we were sailing against the wind, it seemed as if we were barely moving.  It was a job to tack the sails back and forth.  Sometimes the helmsman would move the tiller as we came about and we would lean over at an alarming (I thought) degree towards the water.  That’s when I’d move to the higher side of the boat or stand at the back. 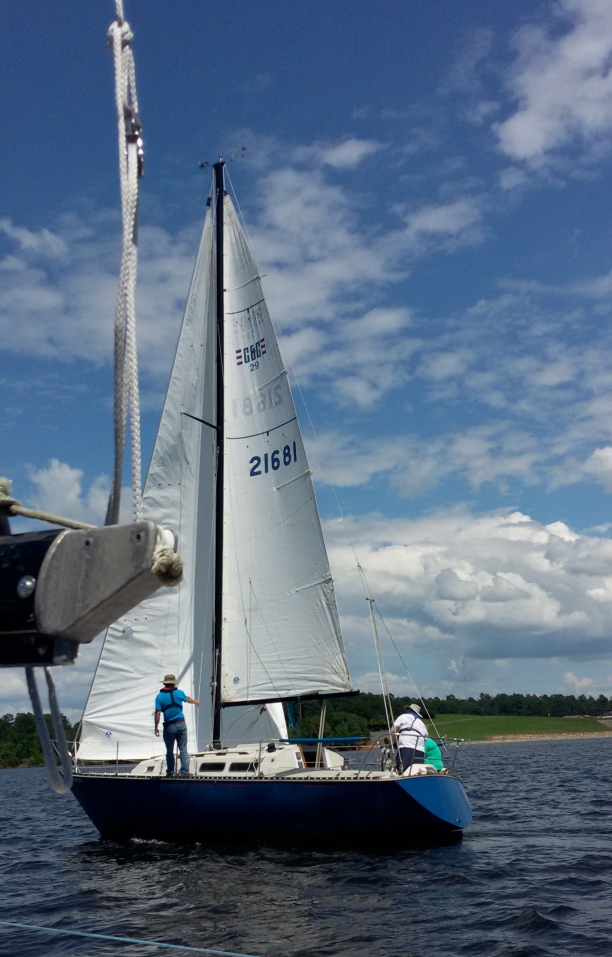 Racing a sailboat is a great way to hone a sailors skill, but I think I like simply sailing around the lake rather than racing.  Give me the easy life of dipping my toes over the side, letting them skim the water. or simply enjoy sitting on the deck watching the sails move.

My thoughts are moving around like the sails being tacked back and forth to catch the wind.  Sometimes I feel so confident that I think I know which direction I’m supposed to be going and then there are the other times that I flounder, like a sailboat without the wind to move it.

The times that I flounder are the times that I let sadness blow me around.  It’s June 12th; our anniversary.  It’s a day that reminds me how much I lost.  Nine years since we celebrated our twenty-fifth anniversary together.  Nine years that I counted without him.  If he were here than it would be thirty-four, but now it is forever 25.  I miss John’s quirkiness, his green eyes, his sense of humor, that crazy sneeze, and his presence in my life.  I miss him as a husband and a dad.

I’ve wondered how different my life would be if he were still here with me.  I’ve tacked the sail to catch the wind.  My boat has tilted toward the water and my heart sped up as I waited for the boat to settle upright again.  It did.  Would he like the person I’ve become?

I’m not as soft-hearted as I once was.  That makes me a bit sad.  I sometimes wonder if it is because I’m older or because I have to be independent now.    Independence has its perks, but it also has its dark side.

Singleness is like carrying a heavy object.  It takes muscles to move, sitting it down occasionally, pushing it along the floor, and then re-lifting to move it into position.  Once it is in place; surveying the results alone without having anyone to celebrate the accomplishment.  It’d be easier if another person came along side to help lift, put it in place, smiling when it’s in place, and then admiring it together.  I know which one I prefer, but it is what it is.

So today, I’m remembering being married to John.  I tried to remember each of our twenty-five  anniversary days, but only a few of them shine out.  Our second, eighth, thirteenth, and our last one the twenty-fifth, I can clearly remember, but the rest…nope!

That’s a tribute because it didn’t take a single day to make me feel special and loved.  It wasn’t a boat race, but a pleasant sail; skimming toes in the water, enjoying the breeze blowing, and tacking the sails as the wind changed and then continuing along admiring the views until it was time to dock the boat.

One thought on “Sailing On”